This study aims to determine how the influence of the use of gadgets on the social interaction of students of the Journalism Study Program, Faculty of Da'wah, UIN Raden Fatah. Using a quantitative approach, the questionnaire as the primary data source. Sampling with a total sampling of 25 students, data analysis using simple linear regression. The results of the study using SPSS version 23 showed that the value of t = 6.883, the significance value was 0.049 with a significant level of 0.005. This means that there is a significant positive level between variables X and Y. Furthermore, the results of the large relationship between the two variables obtained an R Square value of 0.589 (58.9%). This means that the relationship between the two variables is sufficient. Then when viewed from the results of the t-test, the t-count value is obtained by t = (6.883>2.035) with a significant 0.049, then H0 is rejected and H1 is accepted, it can be concluded that the relationship between the Effect of Gadget Use on Social Interaction of Journalistic Studies Program Students Class D Class 2015 Faculty of Da'wah UIN Raden Fatah Palembang has a significant and significant relationship. 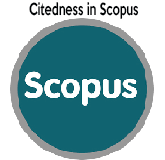